Be Responsible
#Raise your voice
Send us any Fraudulent Action or Enquiry so we can ALL contribute to make a Difference
Date: 09/05/2020
Source: NNA 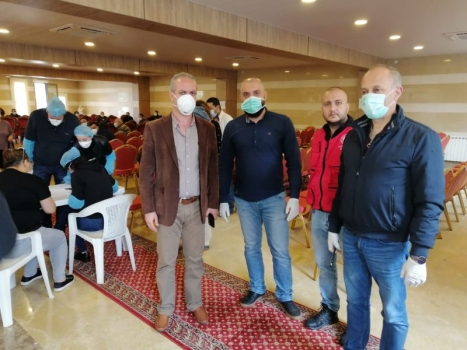 PCR tests conducted by Teams From the Ministry in Metn District

A team from the Ministry of Public Health headed by Dr. Ali Karout conducted PCR tests in many towns and villages in Metn District. People who came into contact with positive cases, those who suffer from respiratory disorders, sinusitis or allergies, or workers with direct contact with people were tested, as part of the Ministry’s plan to conduct a field survey in different regions in Lebanon for more accurate representation of COVID-19 pandemic spread.

Head of Metn Department of Health Dr. Wissam Habcheh oversaw the campaign. “We are working to coordinate the efforts of the Ministry of Public Health and the municipalities in Metn District. The general mobilization and precautionary measures are followed to help curb the spread of the virus, especially after the recent spike of infections that were found among the expats,” Habcheh added.

The first round of testing was in Fanar at the premises of the municipality, where 56 tests were performed on the municipality’s workers, employees and police officers, in the presence of its president Georges Salameh, who confirmed that there were no positive cases in the town so far.

The second round of testing was at Mrouj, where 113 tests were carried out.
Sitemap