Be Responsible
#Raise your voice
Send us any Fraudulent Action or Enquiry so we can ALL contribute to make a Difference
Date: 28/05/2017
Author: NNA
Source: MoPH 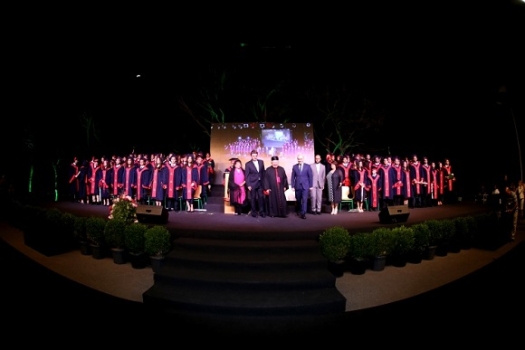 Hasbani during the Graduation Ceremony of Sagesse High School Students: Be prepared for the Future, Have Enough Confidence and Fight for what you Believe in

NNA-Under the patronage of Archbishop of Beirut and patron of la Sagesse Bishop Boulos Matar, a graduation ceremony of 117 students of Lebanese, International and American Baccalaureate was held under the theme “It’s time to value Time”. During the ceremony, Deputy Prime Minister Health Minister Mr. Ghassan Hasbani delivered a speech at the invitation of Head of Sagesse High School - Ain Saadeh Father Gabriel Tabet.

The ceremony started with the Lebanese National Anthem followed by La Sagesse Anthem and telling words expressed in Arabic, English and French in the name of graduates, then a statement made by Tabet.

Guest Speaker Deputy Prime Minister Health Minister then delivered the following speech: “Class of 2017, Congratulations. This is a turning point in your life. You are about to embark on one of the most exciting journeys, and for the first time, you'll realize that decisions you make today will impact you for the rest of your life. Just as you celebrate the end of years of hard work, you will now begin to know why you have been doing it and realize how easy it was. Our world is also at a turning point, full of uncertainties, challenges and opportunities. It is changing so fast that half of you will succeed at careers that do not exist yet.”

He added: “Technology, genetics and materials science are all evolving so fast paving the way for a new industrial revolution that will transform our lives at an unprecedented pace. 3-dimensional printing will allow us to build products, components and even human tissue, based on digital designs and imaging, in a decentralized way, allowing anyone to design and manufacture anywhere. So you will move from being simple consumers to sophisticated designers and manufacturers. Imagine a physician being able to print a healthy bone to replace an unhealthy one using a very high resolution digital image of the original and the exact chemical and biological composition using a 3d printer at his hospital or clinic. At least one of you is highly likely to do that in the next twenty years.”

He then said: “Imagine that in your lifetime, some jobs will gradually disappear. I can list a few such as drivers, pilots, postmen, travel agents, printing workers, insurance underwriters, bank tellers, stock managers, farmers and others. Only the jobs that will require a higher order of knowledge or skill and people who choose careers, such as in the creative, technology, or health care industries, in which the building of or decision making about relationships are central, will thrive during the next wave of automation.”

He said: “In order to make the best out of that future, you need to be prepared, so I am going dispense some advice and leave it up to you to accept it or totally ignore it:

Have enough self-confidence to give you courage but not insolence, don't be afraid to do your best and fail, for learning from failure is the shortest path to achieving success, Take up sports, for this is the best guarantee for a healthy and productive life, Don't smoke for smokers have caused more death to themselves and others than suicide bombers, Make sure you have enough passion about what you do for it is a multiplier of the quality of your product, Be curious, for intellectual curiosity is the seed of innovation, Don't let the cynics put you down for they criticize both success and failure equally so what they say has no value, Take action, fight for what you believe in, challenge yourself, be the man or woman in the arena of life and not the spectator for this is how you create a dent in the universe.”

He concluded: “Congratulations for your success. I wish you a successful rest of your life.”

Bishop Matar also made a statement during the ceremony.

At the end of the graduation ceremony, diplomas were handed out to the graduates by Hasbani, Matar, Tabet, Head of Secondary Department Father Jihad Saliba, International Baccalaureate and American Programme Coordinator of Secondary Division Lady Maalouf.
Sitemap