Be Responsible
#Raise your voice
Send us any Fraudulent Action or Enquiry so we can ALL contribute to make a Difference
Date: 23/07/2019
Author: Minister Office
Source: MoPH 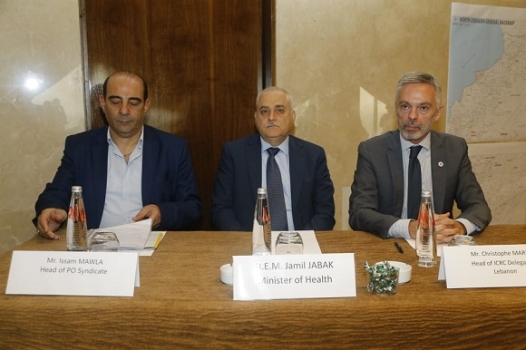 Minister of Public Health Dr. Jamil Jabak launched a project to standardize the prosthetic and orthotic services in Lebanon in partnership with the International Committee of the Red Cross (ICRC), the syndicate of Prosthetics and Orthotics professionals as well as stakeholders during a gathering at Lancaster Hotel in Raoucheh.

In a statement, Jabak noted that the project is of great importance owing to the growing number of patients in need of prosthetic and orthotic services after they were wounded in military activities or others.

Minister Jabak stressed that issues are addressed through different programs, among which the provision of quality devices and assistive technologies according to WHO recommendations. This will leave positive impact at the health care, economic and social levels.

The ICRC's head of delegation in Lebanon Christophe Martin mentioned examples of people who were disabled as a result of explosions or landmines and were able to reintegrate in the society after they were subject to rehabilitation programs. He added that the ICRC is supporting around four hundred thousand patients in 30 countries around the world. In Lebanon, the people with disabilities are given assistance at Sidon Medical center that was established 40 years ago to enable them restore their dignity and reintegrate in the society.

The Head of the syndicate of Prosthetics and Orthotics professionals Issam al-Mawla noted that the memorandum of understanding signed between Minister Jabak and the ICRC is the basis of the standardization necessary to move forward on the development of laws governing the professions related to the rehabilitation of people with disabilities. This will contribute in raising the scientific level of professions, keeping up with the scientific and international development, improving the services of the working institutions, and curbing the unprofessional competition.
Sitemap