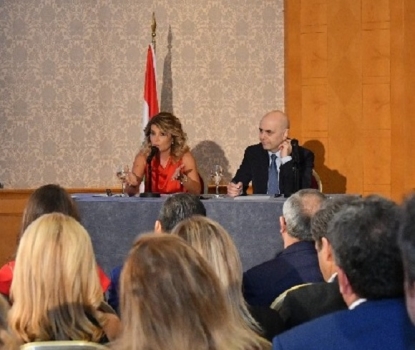 "3a Stouh Beirut Association" Briefed on How Donations will be Allocated

NNA- Caretaker Deputy Prime Minister and Health Minister Ghassa Hasbani took part in a press conference organized by “3a Stouh Beirut” Association, at the invitation of TV host Dalia Dagher to announce how the donations collected during “3a Stouh Beirut” Telethon will be allocated at Metropolitan Hotel.

“The humanitarian activity undertaken by “3a Stouh Beirut” association proves that Lebanon is “more than a country – it is a message” as said by John-Paul II. No sooner has the telethon started than all the political parties were there to donate money to people that no one ever asked about their religion or the region they come from. The goal was to disseminate the media message in a humanitarian way, knowing that tremendous credit goes to OTV channel that believed in the message of our association,” Dagher noted.

“The telethon succeeded in collecting live USD 450 thousand; however the real amount contributed was LBP 380 million. This amount helped the association provide contributions to more than ten families, knowing that some people who made donations refused to disclose their identities. A remaining amount of money will help “3a Stouh Beirut” association, in collaboration with Alfa, develop the project of kiosks managed by persons with disabilities or the so-called “persons with firm will” by Alfa,” she added.

She also noted that “3a Stouh Beirut” association collaborated this year with the Ministry of Public Health in more than one issue, in particular “the early cervical cancer detection campaign”. The association took part as well in workshops on woman empowerment and launched “Idi bi Idik” song. It features lyrics by poet Nizar Francis and is performed by artist Nader Khoury.

Hasbani noted that he remembered the hard work of BBC every year to collect millions of pounds and provide aids to those in need. In spite of the British health system, social and humanitarian cooperation was still needed.

Hasbani mentioned a call from a 13-year-old boy who donated LBP 50000 that turned his attention, as he said “no matter how much aid is put, it can mean a lot if it is transparent and emanates from a true will.”