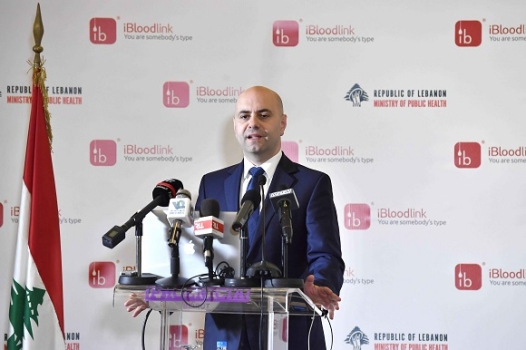 Hasbani Sponsors the Launch of iBloodlink Application: A National Plan for Donation and the Ministry’s Doors are Open to Innovators

Deputy Prime Minister Health Minister Ghassan Hasbani sponsored on Friday the ceremony organized by iBloodlink association at Phoenicia Hotel to launch iBloodlink application that will constitute an important step to benefit from technology into the promotion of health care services, and a big leap in the field of blood donation in Lebanon. This application links patients in need of blood to potential donors of the required blood type, by sending them an automatic notification about blood request.

In the statement he delivered, Hasbani stressed the “role of technology in simplifying human Life in terms of welfare and services”, noting that “technology is directly connected to Life, since between Life and Death; technology can make a huge difference.”

He expected that “the four next decades will witness a wide use of technology in the medical field. Scientific applications in different fields will make a big difference to humanity, in particular those related to medical sector. These will extend human life, increase productivity, simplify life, reduce pain, concerns and health problems and will further humanity.” He added: “therefore, as much as we can within the existing capacities in Lebanon, we will unify our efforts today to leave significant impact in this field. This is a field in which Lebanon can stand out, given its human, scientific, practical and productivity high capacities, in order to achieve great successes in the medical sector and technology in particular, not only at the level of Lebanon, but also worldwide. ibloodlink application is a prime example of this, since it became an international application.”

Hasbani realized that the speed at which the blood is ensured plays a major role in recovery time”. He said: “In Lebanon we are used to deal with emergency cases permanently more than others can do, due to wars, terrorism and others. We always witness national solidarity as for blood donation. Many Lebanese respond to blood donation requests, they are used to do so and they have the culture of giving.” He added: “What we need to do today, whether it is through a national plan for blood donation or technological applications as ibloodlink is to give people greater room for this humanitarian duty they are used to fulfill.”

He stressed that “the doors of the Ministry are open to all innovators who can develop technological applications for the interest of people. The ministry teamwork is working with them and within the Ministry and is releasing new applications, by automating our internal procedures or through applications that help in the field of blood donation, emergency or others.” He announced that ibloodlink has become official on the official website of the ministry.

The Founder of the application and Head of the association Roula Halabi stressed that “ibloodlink constitutes an integral part of all initiatives and activities related to blood donation in Lebanon. It aims at simplifying blood donation.” Halabi clarified that iBloodLink is not a blood bank, it is a special application for blood donation procedure that links the person who wishes to donate blood to the patient who requires blood, whether it is a hospital or an individual.”
She reassured that the application respects the privacy of people, donors or recipients, since the required information from the user is limited to his first name, e-mail and blood type.”

She also described the mechanism of work of this application as “simple” and explained: “Once the user is registered, he became able to request blood if he wishes to, and in one second, all the persons of the same blood type will receive Push Notification. As for hospitals and Red Cross, one can also submit applications via computer devices through "https://www.ibloodlink.com/" . A Push Notification is also sent to all phones.”

The application project started with a personal trial, and the work on the project continued for over three years. She said that iBloodLink has become universal since it is available in Apple Store and Google Play (Android and IOS systems). It is also available in 16 states: USA, UAE, Kuwait, Bahrain, Jordan, Egypt, Qatar, Sweden, Nigeria, United Kingdom, Canada, KSA, Germany, Switzerland and Lebanon…

She invited donors to “download the application to save the lives of thousands of patients, in particular victims of traffic accidents, major surgeries that cause hemorrhage, cancer patients and others.” 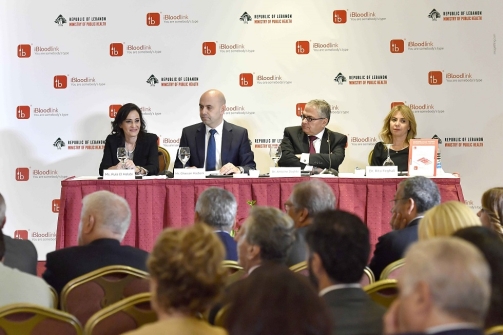 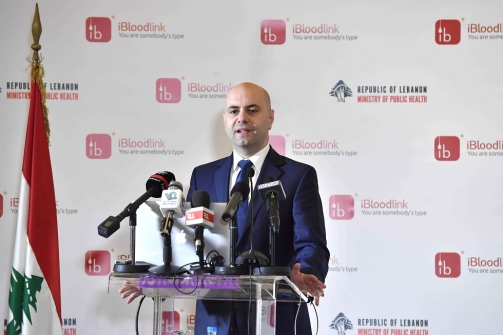