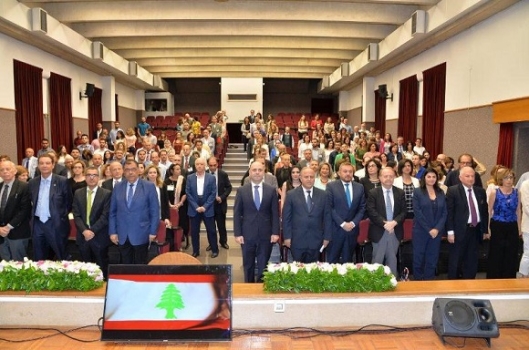 Hasbani During the Launch of the Higher Institute of Heath in USJ: We are Still Far From Achieving Health Equity

NNA- Saint Joseph University (USJ) in Beirut launched the Higher Institute of Health in the context of the fourth Edition of "Faculty of medicine Spring", under the auspices and in the presence of Deputy Prime Minister Health Minister Ghassan Hasbani and USJ President Pr. Salim Dacccache S.J., Dean of the Faculty of Medicine Pr. Roland Tanab, Head of the faculty Dr. Michele Kosremelli Asmar and acamedic personalities and other eminent persons in the fields of medicine, syndicates and specializations, as well as students who participated in the "Faculty of Medicine Spring" over two days.

Minister Hasbani started his statement referring to "health catastrophe that could have arisen due to the uncontrolled Syrian displacement. However this crisis has been controlled by making use of the voluntary civil communities expertise, since a large number of diseases has been contained. Such successes contributed in preserving the medical reputation of Lebanon, knowing that Saint Joseph University plays a leading role in this context. In spite of this, we are still facing gaps in our health system and it's our and your responsibility with other partners to deal with them. These gaps include the shortage of emergency medicine and geriatrics services, in addition to the recent gaps in the fields of general insurance. Despite all we spend on Health we are still far from the achievement of health equity."

As for smoking, Hasbani noted that he has asked to raise the taxes on tobacco, but his request was rejected under the pretext that it would increase smuggling. He noted also that he would continue improving policies related to general health.

It is worth noting that conferences and activities went on for two full days   during which were present eminent persons from Lebanon and abroad such as Pr. Jean-Paul Moatti  and other eminent personalities that took part in the edition of this spring."
Sitemap